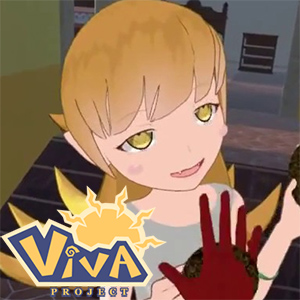 VivaDev came to Wired-7 to answer our questions about videogame development, virtual reality and waifus. VivaDev is the developer of Viva Project, formerly known as Shinobu Project.
First of all, thank you for your time and accepting my interview. I'm really thankful!
This is an interview with user-made questions form Wired-7 users.
There are a lot of questions, and all of them are optional to answer so please only answer the questions you want.

This is going to be posted on a static section of Wired-7 so a lot of readers are going to find us using search engines and other users won't even know what are they reading.

Q: Could you introduce yourself?

A: I'm VivaDev, shader programmer at work, born in Aguascalientes but now live in the US, and I made Viva Project.

Q: How long have you been working on Viva Project?

A: I've been working on it since I learned to model 3 years ago where I made a weeb wedding simulation in Unreal and then shortly afterwards I moved to Unity.

No. 341:
Q: Is it difficult to create a game alone? You have to do the programming, design, models, advertisement and surely much more. Looks like you have to have all the skills of a team in only one person.

A: Yes it was difficult. I do get some people helping me out with making clothing models. I also have a guy who makes sounds for me. Some of them don't mind not receiving a compensation but others I give some money to.
I also use the funds to hire professional Japanese voice actresses from Japanese Voice Acting Schools. And Japanese composers. I've also hired a person who worked on Azure Lane for an original character that's coming out later.
I do all the programming though. There's 2 other small devs who only program the website and the upcoming game launcher.

No. 342:
Q: I remeber your thread in 8chan when the game was suposed to be lewd, what make you change it to a sfw game?

No. 343:
Q: Why did you decide to set your game in a Mexican village? In what ways did you take advantage of this location?

A: Because I like the aesthetic that pueblos have. It's less seen in video games. The advantage was not having to do much "hard surface modeling" which takes a lot longer to do compared to basic old fashioned buildings.

Q: Can you talk us about your first steps in game development? What was the first games you developed?

A: First games I developed was in Flash (en la secundaria). I spent my afternoons learning to make crappy flash games. Viva is the first game I ever published. I usually spent the time learning to build game engines in C++ rather than making games.

Q: What would you do if someone offered you a blank check to create the game of your dreams?

Q: What plans do you have in the future with the development of the game?

A: Future of the game maybe have custom maps but that's something really far out.
Translations is something I'd like to do soon. If it ever gets really big I'd consider multiplayer but that is a TALL order and very difficult.

No. 345:
Q: Did you think to release the project on video game store such as Steam maybe like an early access?

A: Yeah Steam would be kind of fun. I don't know if Steam likes loli games anymore though. I'm VERY against having my project blow up into something corporate. When I was young I wanted to work in the video game industry. As I graduated college and started seeing how the industry changed for the worse, I realized the industry wasn't the same industry I fell in love with years ago. Hell, I hate modern AAA game development. It's very corrupt and corporate.

Q: In the case that the project becomes famous to the point that you can live with the money earned from it. Would you create a video game developer company to continue improving the project?

A: If somehow this game managed to be really big, the conditions for me to open a company for it would have to be very very favorable for me. I highly doubt I'll ever get that kind of a chance. There's also the problem of my game being forever tied to "lolicon pornography" which can easily cause a huge PR mess for any publication.

No. 346:
Q: Is it difficult to program the IA? Are you using anything for the IA or are you doing it yourself?

A: The AI is just one big state machine. It's not terribly difficult if you know how to keep it clean and concise to work with. A lot of it was going back and forth between implementing it in an OOP way and not doing it in an OOP way. I ended up doing it in an OOP way but removing Monobehavior as a base class.
Most of them are activated by player commands just because there is no implementation of autonomy. Eventually I'd like for them to bathe by themselves and cook in random intervals.

No. 374:
Q: Does Viva Project have a finished point or you are planning on continuously developing patchs?

A: Probably keep continuing to develop it

No. 375:
Q: From outside, imageboard users are seen as no-lifers that only try to harass other people. You posted on 8chan about your project.
What was the reaction of the users when you revealed your project? Did the users help you or the development?

A: I was from 8chan. I was a long time denizen of 8chan since 2014. I just decided to start a project in 2017 and post some casual progress on a certain board. The reaction was normal. It wasn't as impressive at the time and it was rather small at the time.
No users helped me.

No. 377:
Q: What inspired you to do a simulator game?
I mean, choosing between weeb games you could have done other type of games, like a visual novel.

A: I just wanted to make a weeb game. I wanted deep interactions and I know nobody will ever make it like how I wanted to. So I made it myself.
Q: Have you created any games before this one?

A: This project is not something I want to go full time on. I have an actual job in the technical industry that makes way more than the patreon. The patreon project is purely a hobby. Less liability and less stress.

A: I have a discord for bugs to report. Usually I tend to refactor big changes after an update though I do try to keep clean code while implementing features. I used git as well.
Q: Do you do any kind of agile development?
The question is focused on how do you plan, design, code and test your game/code.

A: Since I do all the code the bonus is that I know exactly where everything is so there's less planning involved in an organized sense.
That said I like to make a TODO list for things that need to be done. If they coincide with bugs, I tend to work on that first. I used to use online graphs for planning out AI behavior but I have evolved to just do it as I go. I like to leave comments in my code for things that need to be implemented.

No. 386:
This is not a personal attack to your game but...Q: Why all games suck with water effects?
A: I know that simulating a liquid is a heavy GPU tasks so you can not simulate water as real. But with all the improvement game industry is making, water seems to be very behind.

Because water is very difficult to simulate just like you said. We always have to cut back on water effects by just having a simple plane. Particle physics are out of the question right now.
Q: What do you think of Ray Tracing?

A: Ray tracing was implemented by someone else as a hack. It looked meh. I am not going to implement ray tracing right now.Q: Do you plan on allowing modding?
OFC the first mod will be turn your game to NSFW but it won't be official. This could attract more users without changing your developing plans.

A: I dont know about mods. It will be tricky to build a platform with interchangeable scripting assets. My answer is I don't know. Not in the near future.